Skip to content
The Cutoff at the state-owned right-of-way where an unpermitted private fences blocks historic access. Photo courtesy of TRPA board member Alexander Neal.

Save the Cutoff – a Precedent for Loss of Public Waterways

During this hot summer of 2022, TRPA was made aware through Save the Cutoff that one of our iconic navigable streams in Henderson and Navarro Counties, The Cutoff of the Trinity River, was being illegally blockaded and backfilled by an adjacent landowner. On August 5th, TRPA President David Price wrote a letter to the landowner, Iron River Ranch II, LLC, addressing these serious violations and specifically urged the landowner to remove the unpermitted and illicit fence. As this is being written, the illicit fence still stands, blocking river users, fishermen, hunters, paddlers and bird watchers from legally accessing a long-established and cherished piece of the Lone Star State. The fact that this fence is allowed to remain erected today presents Texans with one of the most serious potential precedents concerning our access to rivers: the precedent for loss of our public waterways.

Save the Cutoff has recognized this dangerous precedent and yesterday issued an intent to sue Iron River Ranch II, LLC unless access is restored.

Read below for more details.

The Cutoff was first recognized as an important part of Texas infrastructure in 1846 when the waterbody, which was a part of the Trinity River at the time, was determined to be part of the boundary for Henderson and Navarro Counties. Following the devastating floods of the Trinity River during the early 20th century, a local flood control and levee project successfully severed a 6-mile section of the Trinity River from its original bed and confluence with Cedar Creek, rerouted the river and left Texas with an oxbow lake locally known as The Cutoff. A dam was constructed at the end of The Cutoff in 1926 by Creslenn Ranch for recreation purposes and Texans have been hunting and fishing there since.

In recognition of the risk of losing public access to The Cutoff and the potential adjustment of county lines, the 42nd Texas Legislature passed House Bill 27 which addresses Texans’ rights of use to The Cutoff, reasserts that The Cutoff remains the counties’ boundaries, and explicitly entrusts The Cutoff to public hands forever. The bill recognizes the value of The Cutoff to the public and specifically notes that the original “river bed of the Trinity River in Henderson and Navarro Counties shall remain the property of the State and shall not be sold” and that the bottoms of abandoned channels of the Trinity River are owned by the state. In addition, the bill gives Henderson and Navarro Counties the right to procure right-of-way (ROW) to allow public access and gives the Texas Parks & Wildlife Department (TPWD) the right to enforce the Parks and Wildlife Code (Texas’ hunting, fishing and boating regulations) at The Cutoff.

Fifty years ago Texans were again ensured public access to The Cutoff by the expansion of FM 1667 in Henderson County and the procurement of right-of-way to the northern end of The Cutoff by means of the Texas Department of Transportation (TXDOT). In more recent decades, TPWD used Texans’ taxpayer money to support the productive fishery at The Cutoff by stocking it with tens of thousands of largemouth bass. Today neither of these efforts can be enjoyed by Texans due to the illicit fence placed by Iron River Ranch II, LLC which stands at the last remaining public access point (and notably within TXDOT right-of-way) on The Cutoff.
TRPA supports the efforts of Save the Cutoff and the efforts of private organizations and governmental agencies who aim to protect our wild and blue spaces. If Iron River Ranch II, LLC continues to reject TRPA’s urges to restore access to the historic Cutoff and adhere to the law, then we will support parties’ rights to intervene in the case on behalf of Save the Cutoff, which has been preparing for the worst alongside the Texas-based law firm, Perales, Allmon & Ice, P.C.

Regarding the blocking of access and illegal backfill of The Cutoff, TRPA has asked for input/enforcement from the U.S. Army Corps of Engineers, U.S. Environmental Protection Agency, the Texas Commission on Environmental Quality, TXDOT, the Texas Parks & Wildlife Department, the Texas Water Development Board, the Texas General Land Office, and Henderson County officials.

More on this to come. 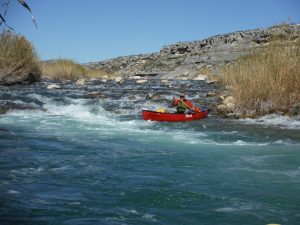