As the newly impounded waters of Bois d’Arc Creek begin filling a massive reservoir northeast of Dallas, my thoughts turn to John Graves and his classic Texas book, Goodbye to a River.

It was in 1957 that the Fort Worth native launched his canoe onto the Brazos River for a three-week journey. His motivation was simple. Texas was in a frenzy of reservoir-building, and five new dams were being surveyed along the Brazos. Graves simply wanted a chance to say goodbye to the river he loved.

He ended up writing a book. Goodbye to a River appeared in 1960, two years before Rachel Carson’s Silent Spring. In its own quiet way, Graves’ work was just as revolutionary. Carson exposed the mass killings caused by DDT. Graves in turn helped us understand what we lose when a river is dammed.

His book, like Carson’s, sparked change. Thanks in part to Goodbye to a River, four of those five proposed dams on the Brazos were canceled. Today, one of the surviving free-flowing stretches is named the John Graves Scenic Riverway. Thousands of canoeists and kayakers, myself among them, have made a pilgrimage to the Brazos to follow in Graves’ paddle strokes.

Graves, who died in 2013 at age 92, did not live to see the construction of the two-mile long, 90-foot high embankment that now looms over Bois d’Arc Creek. But the chorus of boosterism for the first Texas reservoir in 30 years would have sounded familiar to him.

The dam has been described as “an absolute necessity” to guarantee water for the rapidly growing Dallas region. People in Fannin County, who will see their own water piped away to the metroplex, are promised economic salvation in return: 2,000 new jobs, 3,000 new homes and millions in new revenue.

“We river-minded ones can’t say much against them,” Graves conceded of the pro-dam forces. “Nor, probably, should we want to.”

But he did. His entire book became a nuanced, compelling argument for preserving natural waterways. As Graves floated downstream on the Brazos, he showed us how rivers renew our connection to the natural world. They are also testaments to human history. Alongside a river, we see the same rich ribbon of life that countless generations of earlier humans experienced. This priceless inheritance is nearly unattainable in a city — and certainly not in a speedboat.

People have lived along Bois d’Arc Creek’s ancient forests for thousands of years. A recent archeological survey unearthed some 750,000 artifacts from the Caddo civilization. The Caddo were driven out in the 1800s. We missed our chance to learn what they knew.

The new Bois d’Arc impoundment is the sort of colossal engineering marvel our culture has long prized. But in reality, the still-filling reservoir is a relic that reflects a fading 20th century mentality. As temperatures increase, the evaporation rates of Texas’ sun-baked reservoirs could exceed the waters they capture. They’re already approaching the volume of water they supply. According to the Texas Living Waters Project, another proposed reservoir along the Clear Fork of the Brazos River, would have lost 41% of its impounded water to evaporation compared to 59% made available to humans, if it had been built. Will Bois d’Arc supply its 110 million gallon daily quota for Dallas, or will it become a $1.6 billion mud flat?

Other metro areas beyond Dallas have surged ahead with cheaper, more sustainable alternatives to new reservoirs. San Antonio and El Paso have embraced conservation, cutting water consumption by more than 35% over the past 30 years. The Dallas area has barely glanced in that direction.

You don’t have to be an environmentalist to see that free-flowing streams act as nature’s vital lifeblood. Rivers create and sustain life wherever they flow. Damming one up is the equivalent of blocking an artery. Our busy world may not take much notice of yet one more clogged waterway. But dam enough of them and there’s going to be hell to pay.

In Texas, we’ve re-engineered most of our rivers, and we’ve gutted our remaining wild areas as relentlessly as we earlier extinguished Native American culture. Now we’re sacrificing 16,000 acres of an increasingly rare riparian ecosystem so that residents of Frisco, McKinney and Plano can water their front lawns.

“Our present world is a strange one,” Graves observed of the politics of dam-building.

The famed author did not consider himself an activist. He would have never chained himself to a Bois d’Arc tree to protest the new dam. But in his understated way, Graves eloquently expressed his anger. “If you are built like me, neither the certainty of change, nor the need for it, nor any wry philosophy will keep you from feeling a certain enraged awe when you hear that a river you’ve always known, and that all men of that place have known always back into the red dawn of men, will shortly not exist.”

Bois d’Arc is just a little stream, only officially regarded as a “creek.” It has not inspired poetry and prose like the Brazos and other signature Texas Rivers. But, like those other waterways, it has a story to tell and lessons to share. If only we are willing to listen.

Steven L. Davis is the literary curator of the Wittliff Collections at Texas State University and co-editor of the recent anthology, Viva Texas Rivers! Adventures, Misadventures and Glimpses of Nirvana Along Our Storied Waterways. He wrote this for The Dallas Morning News.

PrevPreviousSave the Cutoff – a Precedent for Loss of Public Waterways
NextHidalgo Falls River Festival – Oct. 8-9, 2022Next 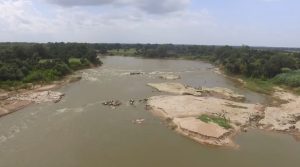 About Hidalgo Falls is located west of Navasota, Texas and has been a home for paddlers since the early 1990’s. By purchasing land at this rare spot on the Brazos